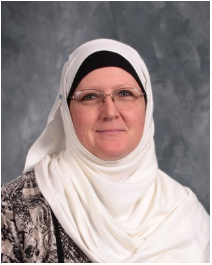 I came to Indianapolis in 1990 and have raised my 5 children here. They have attended both public and local Islamic schools.  I taught full time as a homeroom teacher in 1st, 2nd and 5th grades, and part time as an Arabic and Quran , Art teacher and  7th-8th grade  Literature teacher at Madrasa-tul-Ilm in Indianapolis for 8 years between 1992 and 2002. I worked for 5 years as a substitute teacher with the Plainfield Community School Corp. and for 2 years (2006-2008) as a 1st and 2nd grade homeroom teacher at Eman Elementary in Fishers IN.  I graduated from IUPUI School of Education in 2014 and currently hold 2 licenses from the State of Indiana in Elementary Education and Teaching English as a New Language.